Funny story. My mother has always been a very health conscious woman. Before school ever taught me anything about the food pyramid, my mom was serving up knowledge in the Osho family kitchen. She prepared healthy meals for my brother and me every day before bringing us to school. Oatmeal (little to no sugar/sweetener added), boiled eggs and wheat toast, Korn Flakes, and if she felt like spoiling us, generic Pop-Tarts without the frosting. A 7 year old’s nightmare. All I wanted was some frosting on my Pop-Tarts. Heck, at least some sugar in my Korn Flakes!

It was already a struggle to get me to eat anything, but I gave her an extra hard time when it came to breakfast. We were on a time crunch most mornings & as much as she would have liked to make me sit at the table until I ate all my food, we had to get to school. She’d wrap up whatever remained of my food and told me to eat it on the way to school. Well one day, me being the clever little pain-in-the-butt that I was, I discovered a little hidden pocket behind the back seat armrest in the old Volkswagen she drove at the time.  I stuffed my unfinished breakfast in the pocket, closed it up, repositioned the armrest, and proclaimed “finished!” Terrible, I know, but it gets better. I kept this act up for weeks! “But wouldn’t the food eventually go bad?” Yup. “And wouldn’t it start to smell?!” Oh yes. It wreaked. 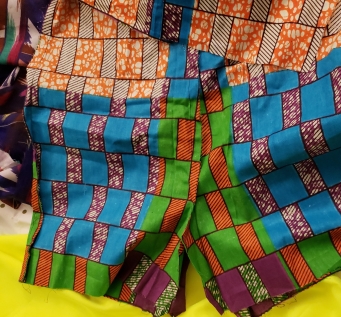 For weeks my mom struggled to figure out the answer to everyone’s question: “What is that AWEFUL smell?!” I endured the smell, for I knew that I was the perpetrator all along.  I kept my secret while she vacuumed, and sprayed, and searched, day after day. I would’ve gotten away with it too if it weren’t for my pesky older brother. One day he was forced to sit with me in the backseat. Inevitably we got into a fight and my poor mom was seconds away from pulling the car over. So my dearest brother created a solution. He pulled down the armrest to create a border between the two of us and my heart dropped down to my bowels. The secret was out. My “food bank” (as my mom has since so cleverly dubbed it) had been discovered.  All I’ll say is my mom was not happy.

Fast forward to today and I’m still stuffing away my unfinished “breakfast” into bins and drawers around my room. Except now it isn’t food that I’m leaving to rot: it’s my creations. Much like when I was 7 I often fail to see the value in finishing certain things. Once I encounter an obstacle or make an error, I begin to see the entire project as a failed attempt and lose all motivation.

Recently, however, the “stench” of those unfinished projects has become unbearable.  It may not be literal food, but just as with the case of the “food bank”, someone somewhere is praying for the resources and the opportunity to access what I so easily throw away.  What I see as unworthy someone else would so eagerly gobble up.  I learned that much like my “food bank”, although I may not immediately benefit from the things that I am making in the moment, every poorly stitched piece, every miscalculated measurement, every mistake I make; it is all working together to help me grow stronger and better.

I have since made up my mind to complete everything that I have buried away. As the homie from the Marcy Projects recited back in 2003, “dude, finish your breakfast”.  Jay-z later explained in his book, Decoded, that he was once told by a friend to “finish his breakfast” which basically means: finish what you start. Pretty solid concept. So just as he stated in his Public Service Announcement: “that’s what I’mma do”. I decided to pull those old, unfinished projects from their hiding places and finish every last one of them. I decided to finish my breakfast.

Stayed tuned for the next episode of The Debby O Show to see how this ends!

3 thoughts on ““Dude, Finish Your Breakfast””

New Year. Same Style. Check out my latest #tryonhaul live on my YouTube channel [ #linkinbio ]. . What are your go to brands for cute, versatile options and great deals? I share a couple of mine in this video so be sure to check it out! (like, share, and subscribe) . This is going to be my year of #consistency by force, by fire! lol. Nah but really though, stay tuned for more of #thedebbyoshow ! . . 🎵@jorjasmith_ ft. @burnaboygram - Be Honest . #newyearsamestyle #winterfashion #styleblogger #hmxme #thisisann #zara
As much as I love me a nice statement piece, I get tired of the "one use only" outfits in my closet. That is why I have started building my #capsulecollection ! Here's a peek at what I've gathered thus far and a few ways I mix and match to maximize each piece. Don't forget to check out the FULL VIDEO up now on my YouTube Channel [link in bio] 🎵: @snohaalegra - Nothing to Me Inspired by: @signedblake I do not own the rights to this music.
In the spirit of #throwbackthursday I figured it's only right that I participated in the #decadechallenge . Have a good laugh at my expense 😅 Full video is on my YouTube channel now! (Link in bio) [like, share, and subscribe!] . . . #grwm #styleblogger #blackgirlswhoblog
Bad to the Bone Outfit details on the blog [link in bio] . . . #bonecolor #badtothebone #thisisann #hmxme #stevemadden #fallfashion #styleblogger #blackgirlswhoblog #rhodeislandandblogger #bostonblogger #newenglandblogger
I don't know how @ciara does it, cause my knees are being iced as I type this👵🏾 . . . @theshaderoom #tsrhalloweenwars #promise #happyhalloween . Edit: For those of you who will be reading too deeply into everything🙄 this is not a call to action ooooo. A beg, it's just for fun. 😁 My @dangerusswilson is on his way 😌
On today's episode of "who wore it best": Daughter ⬅️ Mother👩‍👧lol. Happy Independence Day 🇳🇬✊🏾 . . . #greenwhitegreen #naijaindependence #edoprincess #edoqueen #yorubaprincess #bendelstate #naijajollof #yorubaland #lagoscity #naijanodeycarrylast #nigerianindependence
Welp! My run for #maximnextcovergirl has come to an end. 🤷🏾‍♀️ I must thank ALL of you for your love, support, encouragement, and just overall dope energy throughout the process. On another note, my review for @styleweek Season 17 is currently up on the blog and my YouTube channel! [link in bio] You definitely want to check those out. Swipe ⬅️ for a sneak peak😜 . 🎵@paulcleverlee - I Look So Sweet . . . #styleweek #swnesept2019 #fashionweek #styleblogger #fashionblogger #newenglandblogger #providencia #kinksquadd #freethefro #stylecrush #fallfashion
Y'all! I'm still in the running for #maximnextcovergirl . I'm currently in 14th place but there is only room for 10 ladies in this next round😬 So what I ask of you is: 1. Click the link in my bio 2. Place your vote 3. Set a reminder for 24hours 4. Vote again in 24hours Feel free to share this on your IG story and help me spread the word! It ain't over... til it's over😄 Swipe ⬅️ for reason #686 to vote for me😁 #sisepuede #maximnextcovergirl #pvd #rhodeislandblogger #fashionblogger #fashionista #pvdmodel #providence #top10 #freethefro #tougherthannigerianhair
%d bloggers like this: